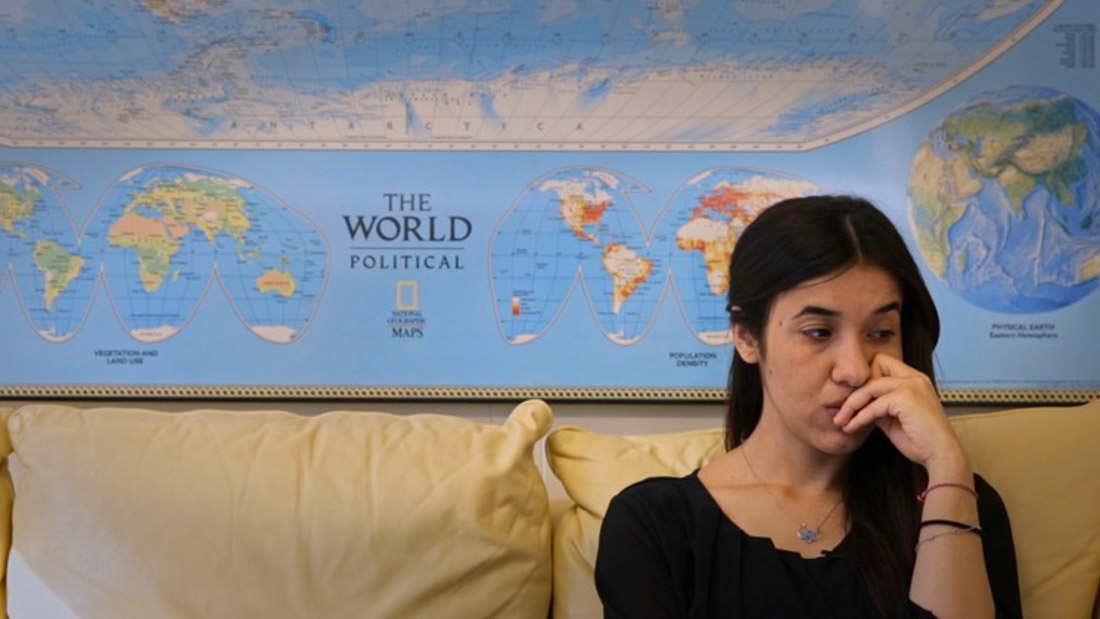 You probably have never heard of Nadia Murad. She’s a hero, a visionary and now a woman that commands the attention of the world, in international peace organizations and delegations, at the United Nations, and in the news cycles of multiple countries. But she’s not happy about this, because the reason for all this attention is because of the incredible suffering she and her people endured under the tyranny of ISIS rule. Most of her people, the Yazidi of northern Iraq, were either rounded up and slaughtered by the terrorist group (the men), or taken captive and made into sex slaves (the women). Nadia herself endured unspeakable torture as an ISIS sex slave herself, and has dedicated her life since her escape to generating international awareness surrounding the tragedy.

Alexandria Bombach, recipient of the U.S. Documentary Directing award at Sundance this year for On Her Shoulders follows Nadia through her travels as she courageously takes up the mantle of spokeswoman for her people. Over and over again, for news organizations, international gatherings, and for the film itself, Nadia tells her emotional story, allowing the waves of sadness and loss to flow out through her tears in media event after media event. Her life now takes on a different kind of torture, of having to experience these events in public again and again, and of having to feel the full weight of the knowledge that she alone has the platform from which a plea for justice can be heard by the world. This is emphasized about half way through the film when Luis Gabriel Moreno Ocamo, the first prosecutor for the International Criminal Court, explains in no uncertain terms that the hope for the retention of the religious and cultural identity of the Yazidi, a diaspora now scattered across the world in refugee camps, lies solely with her. He thinks that she alone can provide a light around which her people can rally, and that this is her central calling and mission, likely to take up the rest of her life. In a candid interview in which she stresses the difficulty of all this to the camera, Nadia confesses that she wishes she could be known for something else, anything else. She’d love to be known as a seamstress, an athlete, a student, makeup artist or farmer. But instead, this is her lot in life. Her only comfort seems to be the love and protection of her interpreter and mentor, Murad Ismael, executive director of YAZDA, an international nonprofit organization dedicated to the support of the Yazidi ethno−religious minority in the aftermath of the 2014 genocide. Murad protects her in interviews at times by refusing to translate insensitive or exploitative comments by various parties along the way, and providing a voice of understanding and familiarity as well as a means for private conversations in her own language.

Towards the end of the film, Nadia is bestowed with a historic honor, that of a United Nations Goodwill Ambassador. While everyone in her circle rushes to congratulate her, to stress how important and groundbreaking this is, the emotional and physical exhaustion on her face tells us everything. There is a surreal element to all of this. In our cultural moment, it seems the road towards awareness runs through the apparatus of entertainment. Nadia and her people are grieving while the world at large seeks to avoid focusing on that which makes us uncomfortable. It is important that we all seek to push back against this phenomenon. Take an evening that you would otherwise use for trivial entertainment of some sort and listen to Nadia’s message for ninety minutes, and find a way to contribute to the plight of her people, if even in some small way. Perhaps we can help lift some of that incredible weight off of her shoulders.