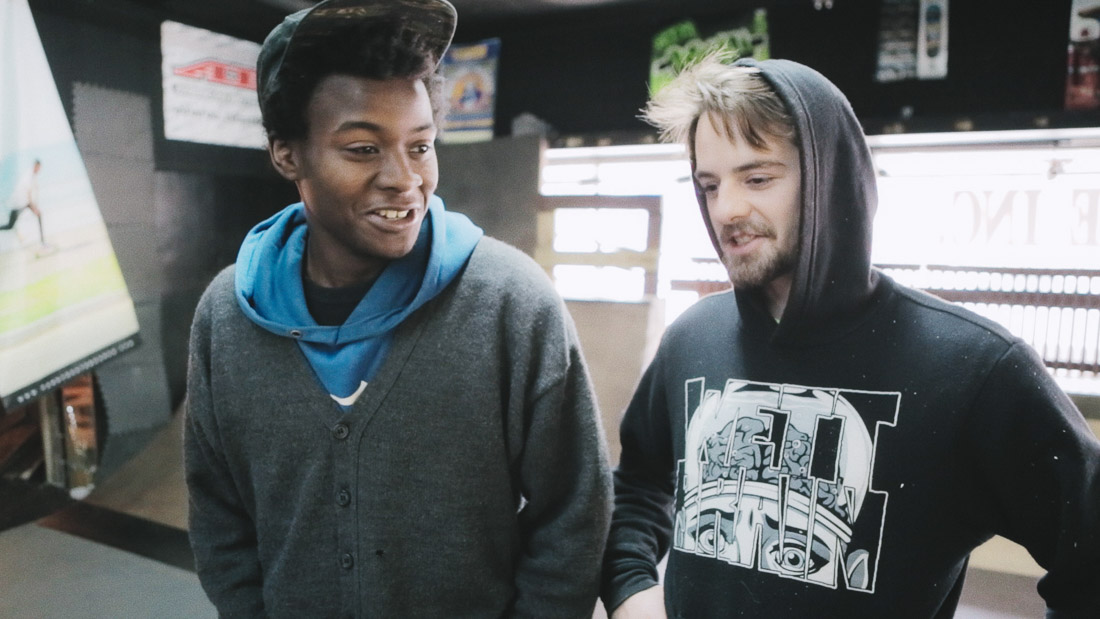 Skateboarding can be a punishing sport. It’s conducted on surfaces that are unforgiving when you make mistakes, like concrete sidewalks and steps, metal handrails and wooden ramps. It’s not a question of if your body is going to slam into something hard, pointed or jagged, but when. But at the same time, the reward for mastering the skill can be transcendent, a small board with wheels making it possible to hover above the urban jungle that is America these days, to fly or glide through the environment with a simple elegance or to create ballet−like beauty surrounding mundane and ordinary spaces. It can be so much more than a way for adolescents to kill time after school; it can be a metaphor for life, with built in lessons about character and the limits of the possible. It often provides a medium through which a community can form. There are skateboard shops, skateboard art, skateboard parks, skateboard talk and of course, skateboard videos.

Just as skateboarding seems to transcend the sum of it’s parts, Filmmaker Bing Liu has crafted a work of transcendent film out of the trappings of what might seem at first like a skate video. Minding the Gap is an incredibly honest, personal and sometimes painful exploration of an enigma, a systemic problem plaguing so many of our communities these days, a problem that thrives in the dark, behind closed doors and by its very nature, punishes those who speak out against it: domestic violence. In Rockford, Illinois, it is a silent cross to bear for many. To get at the issue, Liu approaches the subject by way of observation, adopting a modified cinema verité style, as he films his friends over the course of several years. Cinema verité is a documentary genre, born in the 1960’s whose defining convention is observation. Over the years, the debate has been over whether or not filmmakers should insert themselves into the environments they are filming. It is perhaps more honest to acknowledge one’s self as the one holding the camera in the room then to fake one’s absence? If an important conversation is taking place, shouldn’t the cameraperson chime in if it is appropriate? In the case of Minding the Gap, Liu has been the one friend in his circle who always seems to have a camera, films his group of friends skateboarding or goofing off in the back yard and takes on the role of unofficial documentarian for their many adventures. But film in its essence turns out to be a medium through with a conversation can take place, a conversation that most certainly would not have happened had the film never been made. His relationship to his lovable, witty and often profound−in−a−drinking−buddy−kind−of−way friend Zach, Zach’s girlfriend Tina, and their thoughtful and genuine African American friend Keire is natural, candid and manifestly un−forced. 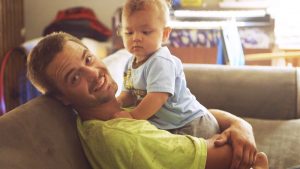 But just as the first impression of each friend seems to cement, new insights are gleaned about who they really are as the human condition is ever more revealed. Layers of superficiality are peeled back one at a time. Early on in the process we learn that Zach and Tina are expecting a baby. In a candid and amusing way, Zach finds it fascinating that after delivery, the hospital staff just hands over the baby for the young parents to take home. He confesses that he has no idea how to raise a child, and wishes there were a class or something that would show him what he was supposed to do. Tina, for her part, admits to Bing that, “no one knows what the **** they are doing.” Meanwhile Keire works out his own life challenges over the years, as a minority in a predominantly white circle of friends with a complicated relationship to his late father. It is almost as if each person whishes there was a manual for life. But instead, each must figure out their own way. The one thing the three boys share is the skateboarding. In the skate world, they have something in which they do know how to succeed. It is more than a mere escape from the sometimes difficult trappings of their lives; it is a bond, and a world in which goals can be accomplished, beauty can be found, and hope can flourish, even when the circumstances outside of that context seem confusing and out of control.

For uneducated adolescents coming into adulthood in a town like Rockford, the deck seems to be stacked against those that do not already have an edge. For Keire, that means working long hours as a restaurant dish−washer. For Zach, who hasn’t yet passed his GED, that means working long hours roofing or in snow removal services, always behind on his bills, barely able to provide for the new mouth to feed in the family. The stresses of the inability to make ends meet, immaturity, lack of community support and the sudden weight of adulthood and responsibility inevitably leads to arguments for the young couple.  In fact, many of the arguments between parents observed or described by various subjects in the film involve fights over the children: who will babysit and who will go out, how to raise them and so on. The question quickly becomes: if the fights that we see on camera are this heated, what are they like when the camera is not around? Here and there the subject of intense “discipline” bubbles to the surface, but is quickly buried or moved on from in conversation despite Bing’s gentle prodding. But as his persistence begins to pay off in pursuing honest answers, we learn that the violence behind closed doors throughout the community is far more prevalent than we would like to believe.

When it comes to issues like abuse, perhaps one of the biggest impediments to change or healing is the fact that it is so uncomfortable to talk about, not just for the victims, but for all of us. There is a sense that we collectively hope that the issue would just go away on its own. But as we have seen time and time again, these cycles of violence repeat themselves, and are passed on from generation to generation. What does it take for that process to end, for the cycle to be broken? Perhaps what we see in Minding the Gap are a couple of steps, albeit painful ones, in the right direction, simply by way of framing a conversation about it. On the surface we might think that nothing has been solved, but for Bing and his friends, a confrontation with the truth has taken place, which is never easy. In choosing to document this emotional journey, Bing is making the effort to include you and I, the audience, on this journey, or perhaps extend an invitation to expand the conversation in spite of its uncomfortableness. We have a chance to take this example, this brave lean into the wind and do likewise. The question then becomes a matter of faith: in taking this step, will the Truth set us free?