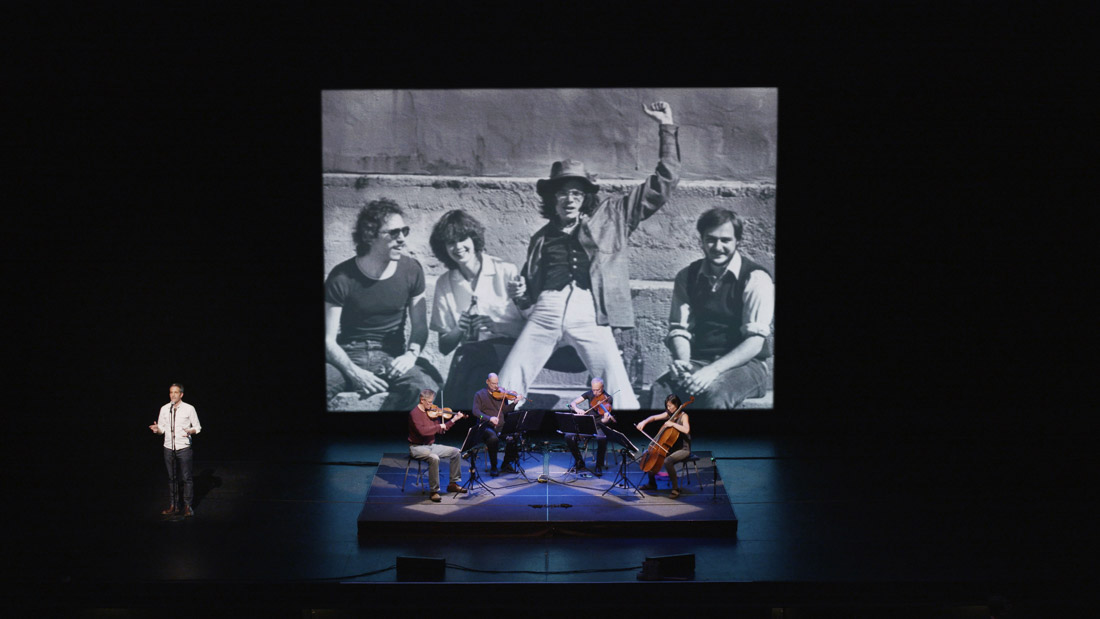 Normally, when it comes to reviewing a film, there is an underlying assumption: the reader should be able to tell whether or not the experience of watching said film is worth it, whether or not they want go and replicate that experience. Of course we all know that each viewing will be different: I may watch a movie on the plane, and have a very different experience than someone watching the same movie at home, which will differ from someone watching it in a theater in Los Angeles, which will differ from someone watching it in New York. There will be different surroundings, different environmental influences that may enhance or detract from one’s concentration on the screen. Normally this difference is downplayed. I might, for example, don a pair of noise−cancelling headphones on the airplane so as to minimize these outside influences.  But these environmental influences are undeniably part of the experience of watching a movie. In A Thousand Thoughts, a contribution to the New Frontier category of mixed media film and performance art at the 2018 Sundance Film Festival, the exploration of these seemingly tangential experiences are highlighted, rather than seen as a contamination of the experience.

A Thousand Thoughts is not, as Sam Green, the director/performer pointed out in the first few minutes of the evening, merely a film. Rather, it is a one−time and wholly unique experience, part live performance, part lecture, and part documentary film. In essence, it is a live concert put on by the renowned and storied modern string quartet, Kronos, performing on the stage below the movie screen, essentially providing a live score for the film about themselves, from the 1970’s up to the present day. On the other side of the stage, behind a desk with a laptop and a microphone, sits Green himself, who invites the audience to be aware of the time and place in which the performance/film unfolds, and engage in reflection with him, the members of the Kronos quartet, and the many talented composers they have worked with through the years about the nature of music. This is sometimes live, on stage, and sometimes through prerecorded interviews played on the screen above. The experience the audience, the musicians and the director have on the night in question cannot, as Green reminds us, be exactly repeated. As an exercise in “tuning the ears,” he invites the audience to sit in silence for thirty seconds, paying attention to the sounds in the room: the movement of the other patrons in their seats, the sound of the fans, recognizing this unique, temporal moment, the moments that make up our lives. Music, of course, embodies this extremely temporal quality. It exists only so long as the notes are played, and then they fade away. Where do they go? In musing about this, Violinist David Harrington concludes that there is some sense that the notes, the songs, the music, exist by way of the listener, not just in the mind, but also in the body, in a deeper kind of memory perhaps, even after the lingering sound waves die away.

Green invites the audience to listen to the very first audio recording ever made, by Thomas Edison in the 1800s, stored on a wax cylinder. At the time of the recording, people marveled at the ability to preserve sound, or a voice, or maybe even to bring back the dead and stop the march of time. But over the years, that which was once a miracle, the act of recording sound, has in many ways evolved into a cacophony of snippets, sound bites, a wall of derivative or just plain bad music assaulting the sanctity of the silence, overwhelming the subtleties of the temporality of sound. This wall of recorded sound, perhaps something that we typically tune out, can in fact cheapen the truly profound, embodied experience of engaging with good music, whether as a performer or a listener. It seems as though Green wants to guide us back (or perhaps forward) to that place (to intentionally mix our metaphors) where music is once again appreciated as a miracle, by being aware of the nowness of the live performance, in hearing notes played in the present on string instruments hundreds of years old. It is an invitation to really listen.

Indeed, this practice of listening appears to be a kind of artistic or spiritual discipline common to so many of the artists that make appearances throughout the evening. Over the years, Kronos has collaborated with a myriad of diverse and talented (legendary) composers, from Terry Riley, Ken Benshoof, and Keven Volans, to Donnacha Dennehy, Alexandra du Bois, Dan Viscont and Philip Glass, as well as rich cultural musicians like Chinese pipa player Wu Man and a West African kora player named Foday Musa Suso. All of these amazing talents appear in the documentary, mostly in interview form, reflecting on the nature of music and the brilliance of the Kronos performances and collaborations over the years, and sometimes in the form of a part−live−part recorded performance, as the live and present Kronos quartet plays along with a musician or composer on screen. At one point in the film, composer Terry Riley lies down on the grass, his white beard rustling in the breeze, covers his face with his white hat and listens to the wind blowing through the pine trees. He confesses that this is how he’d like to spend his last moments of life, just listening. Music, Kronos the quartet, Reiley the composer and Green the documentary filmmaker seem to tell us, is like this. It is this. Wind moving the trees, swirling around and interacting with the objects it encounters; perhaps we might even think of it as breath.

One of the unique quirks of attending film festivals is the chance to meet the filmmakers, producers, directors, writers and performers. There is a very real connection to any work of art that exists when you meet the artist, versus when you have a mediated experience of the work, with little more connection to the artist than the casual reading of the credits as they scroll by. Sitting in a theater knowing that the director is in the room causes one to pay attention in a different way, to become an active viewer, in anticipation of a conversation with the artist that will soon follow.

The emphasis on having a real-time, personal, unique experience with one of the best musical ensembles of our generation constitutes a gift, in communing around the temporal magic of sound, music, and the collective act of listening. The effect of the encounter is to be changed, to walk out of the theater, having been reminded to look closer. Like the way composer Terry Riley listens to the wind in the trees, Sam Green listens to the room, and the way Kronos engages with the music. Following the performance, I stepped out onto the cold streets of Park City, observing a light, delicate snow falling, white and fluffy against the darkness of night, the flakes melting on my had in an instant, not unlike the fading of the notes of the violin. Suddenly I was reminded of those words spoken at the very beginning of time, “let there be…” and the subsequent miracle of existence that occurred as a result of those words spoken by Yahweh over the void. The fact that these snowflakes exist is no less a miracle today. Let there be… music, and there was music.

There are rumors that Kronos, Green and behind the scenes director Joe Bini may take A Thousand Thoughts on the road as a theater piece. If they do, I would encourage you to go, looking for your own encounter with the music, with the performers, with sound and perhaps even that breath of life.