Hey all, in the spirit of author and creativity consultant Austin Kleon’s notion of “showing your work,” I thought I’d update you all on what I’m up to here in Paris.

My documentary, The Space of Our Time is about urban planning, or more specifically about how the design of our environment affects quality of life. How does it, for example, affect community, daily habits and overall happiness? Much of my high school and undergrad leisure time for example, was spent in parking lots. The project evolved into a kind of comparison between European living and quality of life relative the design of these older, more compact and organic cities, and the “modern” car−centric design of most American cities.

In the course of my interviews, I encountered a lot of people talking about a French architect named Le Corbusier, who in the 1920’s advocated for his “Plan Voisin” or “Radient City.” For this, he proposed the demolition of two square miles of downtown Paris in favor of this. 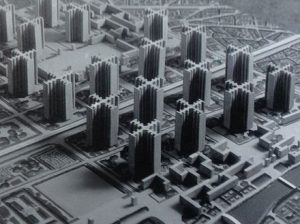 That would have been 18 glass towers (full of office space) set up on a uniform, gridlike pattern, with large swatch of grassy park area in between, and futuristic transportation technology that would whisk people in and out of the city. 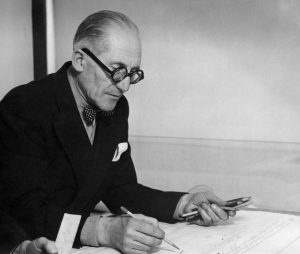 This, of course, never did come to pass, and I think most people universally agree that the destruction of so much of the historic core of Paris would have been a terrible tragedy.

Well today I walked those two square miles, filming along the way with my two cameras, observing the street life that exists in the area. 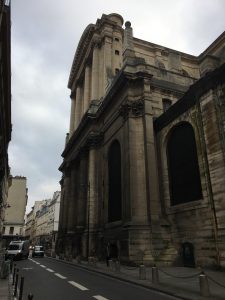 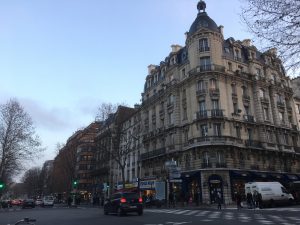 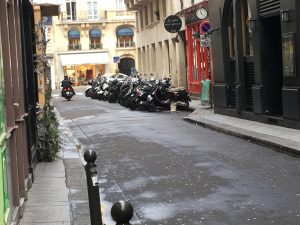 The area is home to many historic churches, charming streets and gorgeous buildings. The functions of each neighborhood is widespread: with all levels of income (relative the expense of Paris), shops, restaurants, cafes, schools and parks. Today it would be crazy to suggest that the area is “depressed” or “blighted” and deserving demolition.

But this is a great illustration: ironically, what failed to happen in Paris ended up happening in many of the great American cities: downtown Los Angeles, Houston, and even parts of New York. Older neighborhoods and small−grained urbanism was swept away for large, top−down developments that might, like Le Corbusier’s model, look good from 7,000 feet in the air. But it is devastating to the human scale. When things are too far apart to be able to walk, the automobile takes over, and rather than functioning as a tool of convenience, becomes a prison. We witness this every day on the freeways of Los Angeles.