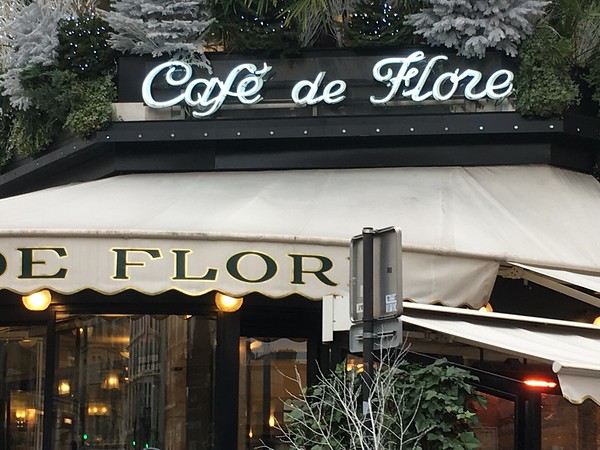 It was a quiet, rainy Sunday morning today in Paris, and I left my hotel early in search of a famous café, Café du Flore, which, as it happens, is directly across the street from Les Deux Magots, on Saint-Germain des Prés. Both of these cafes are famous for being inspiration points for prominent Parisian intellectuals and artists.

Having studied philosophy for my first master’s degree, I have a soft spot for the existentialists, Camus and Sartre, although I now see them as indicative of their era. I can remember reading passages from their works in class and imagining the view from the cafes in which they would write.

In particular, Sartre famously used an example of a waiter at the cafe to illustrate his notion of “bad faith” or the antithesis to authentic living, in Being and Nothingness, a profound concept that I still sometimes see illustrated in my daily life. As a filmmaker, I think about the notion of authenticity quite often. When we are observing someone on screen, their actions can come off as either genuine, natural or believable, or as is the case with bad acting, forced, fake or inauthentic. With nonfiction film, interestingly enough, even though we are dealing with non−actors, we often get the same sense. We perceive the people on screen to be either authentic or inauthentic. Well Sartre had a word for that feeling of inauthenticity, he called it “bad faith.”

I’m going to quote a paragraph here, a paragraph which may have been written in the seat in which I now sit.

“Let us consider this waiter in the cafe. His movement is quick and forward, a little too precise, a little too rapid. He comes toward the patrons with a step a little too quick. He bends forward a little too eagerly; his voice, his eyes express an interest a little too solicitous for the order of the customer. Finally there he returns, trying to imitate in his walk the inflexible stiffness of some kind of automaton while carrying his tray with the recklessness of a tight-rope-walker by putting it in a perpetually unstable, perpetually broken equilibrium which he perpetually re-establishes by a light movement of the arm and hand. All his behavior seems to us a game. He applies himself to chaining his movements as if they were mechanisms, the one regulating the other; his gestures and even his voice seem to be mechanisms; he gives himself the quickness and pitiless rapidity of things. He is playing, he is amusing himself. But what is he playing? We need not watch long before we can explain it: he is playing at being a waiter in a cafe. There is nothing there to surprise us. The game is a kind of marking out and investigation. The child plays with his body in order to explore it, to take inventory of it; the waiter in the cafe plays with his condition in order to realize it. This obligation is not different from that which is imposed on all tradesmen. Their condition is wholly one of ceremony. The public demands of them that they realize it as a ceremony; there is the dance of the grocer, of the tailor, of the auctioneer, by which they endeavor to persuade their clientele that they are nothing but a grocer, an auctioneer, a tailor. A grocer who dreams is offensive to the buyer, because such a grocer is not wholly a grocer. Society demands that he limit himself to his function as a grocer, just as the soldier at attention makes himself into a soldier-thing with a direct regard which does not see at all, which is no longer meant to see, since it is the rule and not the interest of the moment which determines the point he must fix his eyes on (the sight “fixed at ten paces”). There are indeed many precautions to imprison a man in what he is, as if we lived in perpetual fear that he might escape from it, that he might break away and suddenly elude his condition.”

This is very interesting, isn’t it? From Sartre’s point of view, everyone is acting. We are all playing roles, often self−imposed, based on what we think society wants us to be. But in doing so, we lose a little bit of ourselves. So much of the self−help literature out there deals with recovering that sense of authenticity, shedding the “role” placed upon us by society and becoming out true selves. In theological terms, we might see authenticity in terms of human flourishing, of becoming the beings that we were created to be.

It is fascinating for me to revisit Sartre now, having studied him prior to my theological education, and back then having seen his notion of inauthenticity as kind of arrogant, the opposite of Jesus’ example of the suffering servant. Do you think Jesus might have thought of himself as playing the “role” of savior at some point, wishing that he could shed that imposition upon his personhood in favor of what he really wanted? Perhaps some of this is what is going on in the wilderness temptation passages. But now I see things differently. Might we be able to talk about authenticity in terms of a realization of our genuine selves, selves that were created by the great Being−in−Himself? Perhaps bad faith really is submitting to something other than what we truly are. In this case, Sartre’s waiter could recover so much more life in his day−to−day activities if he shed the role of “waiter” and adopted the role of “human being who works as a waiter.” The difference, perhaps, would be subtle, difficult to spot, but perhaps more obvious to us when seen in a film.

I’m reminded of the great Maysles Brothers film “Salesman” (1969). In the film, the camera follows a band of bible salesman around the state of Florida attempting to sell expensive Catholic picture bibles to poor families whose names had been garnered from local church registries. As the men trudge from house to house, their inauthenticity is every present. They are most assuredly playing the “role” of salesman. We are presently given the privilege of observing their inevitable break of character as they leave the homes in which they had given their pitches, usually angry and disappointed for not making the sale. The climactic moment in the film is when one of the men finally bursts out in anger during a pitch, finally telling the family what he really things of them. He sees them, not as human beings, but as objects for his sales pitches, and when they do not cooperate with his agenda, anger is the result. Perhaps this is the moment in the film in which he finally achieves authenticity, sheds his “bad faith” and reveals his true self. Here’s the kicker though: his true self isn’t all that pretty. Sartre, I think, gets it right in suggesting that we need to find authenticity in our lives. But we might be able to build upon this notion with the idea that our true, authentic selves can be our best selves, and that we can truly be better people on the other side of redemption. In other words, we can shed the destructive societal social roles that cramp out humanity, but we can also grow and change in order to learn how to be truly authentic, living in to the way in which we were designed.